Last week, I looked that the core book for Adventurer, Conqueror, King.  It was a lengthy review, primarily due to the amount of great content that Autarch crammed into the book.  Seriously, for a 270 page book there is a lot of mechanical information that is clearly and concisely detailed.  The depth of the rule set is staggering.  But Autarch did not stop with just one book; they followed the Core book up with the Player’s Companion. 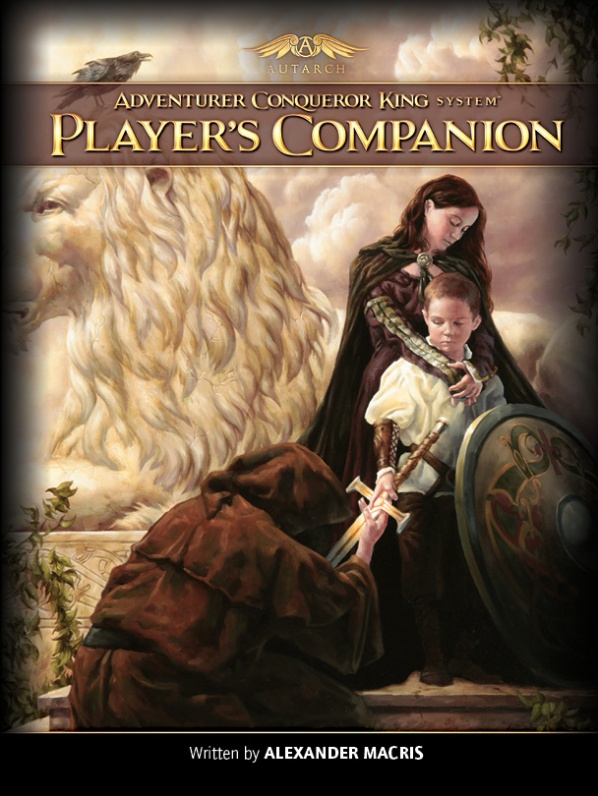 The Player’s Companion is 158-page book that follows closely in the footsteps of the Core ACKS book in terms of art and layout.  There are some full-page pieces of art in the Player’s Companion that are stunning; and the cover for the book is even more striking than the core book.

A one page introduction to the book gives us a brief outline of book’s content as well as a very interesting note to the Judges of ACKS.  “Every campaign is a law unto itself,” is Autarch’s motto, which is prominently displayed on their website.  This book gives a lot of options to make your campaign world unique.  If the Core book provides the mechanics to realize the world and domains of your setting, the Player’s Companion gives you the tools to make the races, classes, and spells just as realized.

But the writers make it very clear, the rules in this book are optional.  Nothing in here is mandatory, which is reminiscent of the 1st and 2nd edition days of fantasy gaming.  The authors give ideas on how to use the Player’s Companion in a campaign.  Whether you want a modern approach where everything is fair game, an à la carte rules and class selection, or an old-school, highly specialized class game, this book has something for every campaign.

The Core book gives us access to 12 character classes.  The Player’s Guide over doubles our choices with 18 new classes.  Iconic fantasy classes such as the Paladin, the Anti-Paladin, the Barbarian, the Mystic (monk), and the Paladin are all realized within ACKS.  Dwarves and elves each get three new classes, and we get a gnome class as well as a Thrassian gladiator (which is essentially a lizard man).

The Player’s Companion, however, does not just contain classes that you have seen in a myriad of other fantasy games.  Some classes, like the Thrassian Gladiator, the Nobiran Wonderworker (a class that can cast both arcane and divine spells), and the Zaharan Ruinguard (a chaotic necromantic knight) are tied to the mythology of the Auran Empire, while others like the Venturer (a bard-like master of a world’s economy) are designed to tied directly into the unique campaign rules of ACKS.  There are other classes that stand out, like the Dwarven Machinist (who creates and uses automata), the classic archetypes of the Elven Enchanter and Elven Ranger, and totem aligned Shaman.

The whole of this book, much like the Core book, is packed with fantastic mechanics.  But if the Player’s Companion only consisted of Chapter 3, it would still be worth the $10 they are asking for the PDF.

I mentioned in my review of the core book that the classes in the core book came with a single template.  This template was a selection of gear and proficiencies packaged together to make customize your class (like making a Fighter a Mercenary) and let you jump right into the game.

This chapter gives 8 templates for each of the 30 classes now available for ACKS.  Now your fighter can be a Thug, Ravager, Corsair, Guardsmen, Mercenary, Gladiator, Legionary, or Lancer.  They make character generation fast and easy, supply great role-playing and background cues for players, and provide a level of customization to each of the classes.  Look at the variation of the fighter provided above.  And, from a GM’s perspective, the templates make it easy to generate NPC parties for your game.  7 sets of 3d6 and you are done, gear and all.

Autarch also provides you with the tools to create your own classes and races.  They both work very similarly.  Building a class requires the Judge to allocate points among the classes: Hit Points, Fighting skills, Thieving skills, Divine skills, and Arcane skills.  Each point spent in a category gives the Judge choices to make for the class and its abilities.  It is a simple process that contains a lot of flexibility.  Races are built much in the same way, with point allocation. After establishing the race, you can start building its custom classes.

The chapter ends with a huge list of custom powers and some great guidelines for developing your own powers.  At first blush, it seems that all of the custom powers from the classes within the Player’s Guide are available to Judges in designing their own classes, once again showcasing the internal consistency of ACKS.

An important thing to point out is that ACKS is not looking for game balance across the range of classes, at least not in the way modern games define the term.  ACKS balances classes with their XP chart.  In ACKS, a first level fighter is far more versatile and durable than a mage.  However, as the mage levels, her power expands far beyond the scope of the fighter, so her XP table is tougher.  Like-wise, Elves have more bonuses than humans, so their classes are inherently tougher to level in than a similar human class.

This chapter covers some supplemental rules to the ACKS magic system.  The main expansion on the system is for improving the results of all the magical research possibilities in the Core book with experimentation.  However experimentation is not without its risks, as can be seen by the many mishap tables provided.  There is also a great table for generating random spell signatures, the personal flavor each mage gives to the spells they cast.

Autarch provides rules for creating your own spells for ACKS as well.  Again, there is a simple elegance to the way you construct spells.  The book takes you step-by-step through the design, allowing you pick and choose the effects till you get the spell that you desire.  I have designed a variety of custom spells for my Dark War game, and I have found that with a good idea of the final effect in mind, you can create a custom spell in under 10 minutes.

This chapter ends with updated spell lists and an index of new spells and high level rituals.

The Player’s Companion wraps up with a mélange of various additional rules.  Character starting ages and aging effects, new equipment, and modifications to the follower tables for the new classes are presented here.  New proficiencies and the costs of adding pits and traps to your structures round out this chapter and the PDF finishes off with a nicely hyperlinked index.

Aptly titled, the Player’s Companion contains a wealth of information for any player of ACKS. For a book that declares that its entirety is optional, I find that I would be hard pressed to run an ACKS game without the majority of the Player’s Companion.  I know I could, but I feel like I would have one hand tied behind my back.  I can’t stress how useful the templates are or how simple the custom creation rules are.  This book is a great addition to the ACKS system, as well as any OSR game, for much of the material in here could be easily ported to another game of choice.

If you are running ACKS, this book will help tailor make the system to your world.  If you are on the fence about ACKS, check this book out.  Its flexibility and substance just might make you a convert.

You can buy the Player’s Companion PDF here or here and can order the physical book here or through your FLGS.

Origins of a Dark God

What I am running 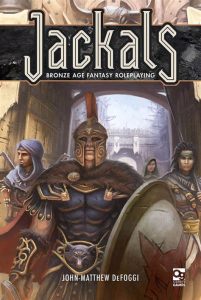 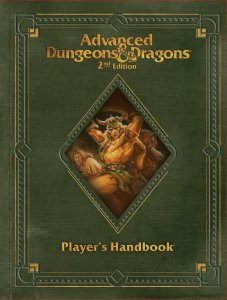 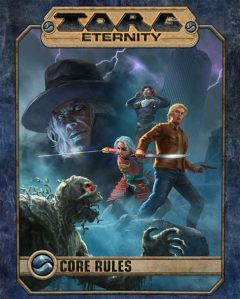